Get instant property alerts for www.findcolumbushome.com

Travel east of central Westerville and just past the Hoover Reservoir you’ll find the exquisite community of Upper Albany West. The area is highly sought-after and features some of the best properties in suburban Central Ohio today. Upper Albany West Homes For Sale are going fast and, given the beauty of the neighborhood, the availability of modern conveniences, and the closeness of capital city Columbus, it’s not hard to see why. The area is home to many excellent schools, including Wilder Elementary, McVay Elementary, and New Albany Montessori for younger children. For middle schools, Upper Albany West residents have access to the nearby New Albany Middle School, while Heritage Springs and Blendon are just across the reservoir to the north. In regard to high school, nearby New Albany High School and Cornerstone High School are options, while the Westerville City School District has its Westerville-South location closest to Upper Albany West. Upper Albany West residents have access to a wide variety of career opportunities in the immediate area. With the City of Columbus less than twenty miles away, openings in every industry can be found. In addition, the job markets of Westerville and adjacent New Albany are available too, with standout options including Mission Essential, Abercrombie & Fitch Co. e-Cycle, Accel, and Trim Systems Operating Corp. There’s also plenty to do in the area in terms of attractions. Catching a musical at the Jeanne B. McCoy center is great if you’re into the thespian arts, as is Otterbein University’s theater as well. Rose Run Park and Hoover Reservoir Park are also two popular spots for spending an afternoon, each offering wide expanses of natural beauty. Avid golfers will be pleased to know The Medallion Club, the area’s premier course and country club, is a short drive away as well, as is The Golf Club at Little Turtle and the New Albany Country Club too. Upper Albany West is close to a variety of excellent restaurants too, including American pub fare, Italian, Thai, Greek, Mexican, and more. Grab a taco or burrito at Yabo’s Tacos, Condado Tacos, or good ol’ Chipotle Mexican Grill. Try Piada Italian Street Food for a fast casual take on the classics or sit down at Giammarco’s or Minico’s. For fine dining, Mitchell’s Steakhouse and Eddie Merlot’s are not far and well worth the visit.

Upper Albany West is one of the area’s most sought-after locations, and properties are going fast. Please contact us at (614) 316-3324 if you’re interested in buying or selling in this area or any other area of Westerville, New Albany, or Columbus.

$479,400
4 Beds ⋅ 3 Baths ⋅ Tiffany N Prather
Welcome to the desirable Upper Albany West community! This gorgeous 4 bedroom home, built in 2017, awaits its new owner. Upon entry you'll discover an open floor-plan, with a flex room that could be used as an office, living or dining area. The spacious family room opens to the kitchen with a large island. Adjacent to the kitchen is a morning room beaming with natural light and overlooks the HUGE new patio deck and yard. Perfect for hosting family & friends! Upstairs has an open loft space. The primary suite has 2 walk-in closets and two of the secondary bedrooms also have walk-in closets. The full basement with a bathroom rough-in, is ready for your finishing touches. Upper Albany West is a welcoming, engaging and pet-friendly community. Enjoy the clubhouse, gym and pool. Click here to search for newest Westerville homes for sale! 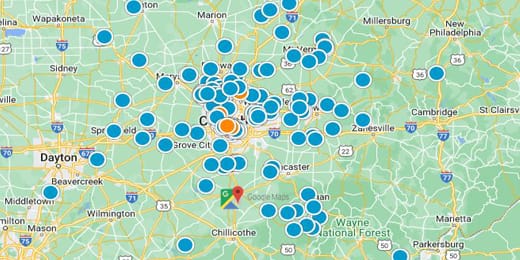